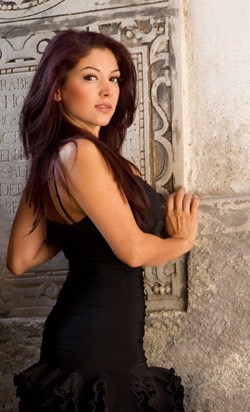 Nazanin Ezazi won International Media Award for her enchanting performance in the 29th International “Hans Gabor Belvedere” Singing Competition, one of the most important competitions for young opera singers in the world. She was also the only singer from Austria who could be admitted in the final rounds of Placido Domingo’s International Singing Competition “Operalia” in 2011 in Moscow, where she received 3 offers from Domingo, a 2 years fix contract as soprano soloist in the young ensemble of the Los Angeles Opera House, Washington Opera House and Valencia Opera House. Furthermore, she was also the sole soprano to reach the final of the “Hilde Zadek” singing competition in Vienna.

Furthermore she reached also as only soprano the final round of the international Hilde Zadek singing competition in 2011.

Based on her stage performances in diverse roles, Nazanin was nominated in 2014 for the Austrian Music theatre Price (Goldener Schikaneder).

Nazanin completed her 2 studies, opera performing and singing pedagogy, with a distinction in the University of Music and Performing Art of Vienna, (the second best music university in the world). At the same time she graduated in musicology at the State University of Vienna. She received her instruction in opera singing from Prof. Maria Bayer and Prof. Margit Klaushofer.

Already at the beginning of her studies Nazanin distinguished herself with her excellent performances for which she has been rewarded with various international scholarships and prizes. During her studies she received “ein Welt Stipendium – the World Scholarship” by reason of her special performances, one of the most difficult scholarships to obtain in Austria as a non-Austrian student.

She was also granted a scholarship from the Thyll-Dürr foundation of Switzerland, which is reserved for highly skilled and remarkably successful students.

After her studies she debuted as Susanna in LE NOZZE DI FIGARO at Schlosstheater Schönbrunn in Vienna. She also sang the title role in George Antheil’s VENUS IN AFRICA at Vienna Chamber Opera.

In 2010-2011 the Graz Opera House after several auditions engaged only one person in its young cast, that was Nazanin Ezazi.

After 1 year Nazanin became a permanent member of the cast at the Graz Opera House.

There she gained a wide repertoire and sang, amongst others, Adina/L’ELISIR D’AMORE, Pamina/THE MAGIC FLUTE, Dido/DIDO AND AENEAS. She was seen as Nannetta in FALSTAFF, Helene in EIN WALZERTRAUM, Carlotta in GASPARONE and Inès in LA FAVORITE.

In addition to that, she interpreted the role of Sand- and Taumännchen in HÄNSEL UND GRETEL, Antonia in DER MANN VON LA MANCHA and sang CARMINA BURANA.

In the context of her international appearances Nazanin sang in summer 2013 in Nancy, France, in front of her up to now biggest audience of 10000 people.

During the season 2014/2015 Nazanin had Manon/Manon-Massenet in her programme, she was heard again as Pamina in THE MAGIC FLUTE, as Jemmy in WILHELM TELL and as Mistress in EVITA.

In the Season 2016-17 Nazanin sang in the „Theater an der Wien“ and in the National Theatre of Mannheim. In March 2017 occurred her debut indoor at the Concertgebouw in Amsterdam.

Since 2018 until present various concerts and recitals, among others also with different guest artists at Musik Salon Ezazi.

List of the conductors with whom Nazazin Ezazi has worked together:

Besides her engagement at the opera Nazanin is member of Sopran Trio “Sedonia”, with whom she is performing in many countries and collaborates with Universal Music.

Furthermore, she participated in several TV broadcasts, among others the Star TV Miss Earth Swiss 2013, the live performance by the “Starnacht in der Wachau” in September 2015, the musical opening of James Bond premiere “Spectre” in Vienna in October 2015, the appearance as guest star in the Austrian television (ORF) show “Heute leben” the 29th of October 2015, the live performance in the ORF Christmas charity programme “Licht ins Dunkel” as well as the appearances in Manoto TV London the 14th of February 2016 and the 20th of March 2016.

The 25th of November 2016 Nazanin also was a guest at the “Licht ins Dunkel” in Burgenland ORF show, on 02.12.2016 at the Sedonia CD presentation in Graz and eventually she took part at the ball of officers in the Hofburg in Vienna the 20th of January 2017.

Beside her long-time experience onstage, Nazanin has distinctive pedagogical competences supported from her university education which she puts into practice in the summer semester 2017 at the University of Music and Performing Arts of Vienna with an assistant contract for supporting the singing lessons of the university professor M. Klaushofer (the new chief of Institute of Singing and Music Theatre) and since the winter semester 2016 in the Vienna Conservatory and Prayner Conservatory in Vienna as an associate lecturer.

Furthermore Nazanin holds since a couple of years periodical workshops in Persia with many participants.

In addition to that, in the last years Nazanin has been holding regular workshops at home and abroad with numerous participants.

In 2012 Nazanin obtained from the Austrian Government the Austrian citizenship due to her enduring special academic and artistic achievements.